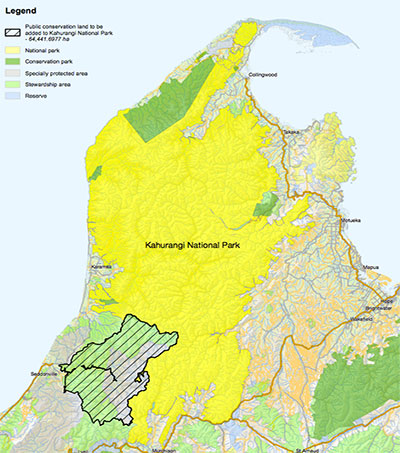 Kahurangi National Park, situated in the north-west corner of the South Island, the second-largest national park in the country, has expanded by 14 per cent, roughly half the size of Auckland.

More than 64,000ha of conservation land in the Mokihinui River catchment area on the west coast north of Westport will be added to the park, which includes 15km of riverbed.

A hydroelectric dam was proposed for the Mokihinui River in 2007, but was rejected due to strong public opposition and concern about the environmental impacts.

Now, that same river has has been protected under the country’s strongest environmental laws.

Sage said the project would have threatened plants and wildlife including the blue duck, the native kaka bird, bats and giant land snails.

Conservation group Forest & Bird said they were “stoked” at the expansion, as the region was of “extreme conservation value”.

“It’s fantastic to see this important landscape finally getting the protection it deserves … the lesson that should be learned here is that major development projects don’t belong on conservation land,” Forest & Bird’s chief executive Kevin Hague said.

“With New Zealand’s environment in crisis, and the impacts of climate change expected to increase, now more than ever our public conservation land is needed for its real purpose, conservation,” Hague said.

There are 13 national parks in New Zealand, and the largest is Fiordland, at more than 1,230,000ha. The Mokihinui addition will become official on 11 April, and take the park’s size to a total of 517,335ha.