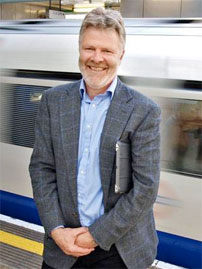 Profiting From Here On In

Chief executive of Virgin Media New Zealander Neil Berkett, 56, is at No. 51 in the Guardian’s annual Media 100 list which ranks the industry’s most powerful people. It has been a landmark year for Virgin Media, which reported its first annual profit in 2011 after three decades of losses for the UK’s embattled cable TV industry. Berkett, who took over Virgin Media in 2007, a year after it was formed by the merger of NTL, Telewest and Virgin Mobile, said: “It will be profit from here on in.” Virgin Media has built its business on the twin appeal of superfast broadband and – more recently – its on-demand offering, TiVo, which Berkett described as “the most rapid connected-TV rollout in the world”. With annual revenues of around £4bn, its profits remained dwarfed by rival BSkyB. Berkett is also a non-executive director of Guardian Media Group.