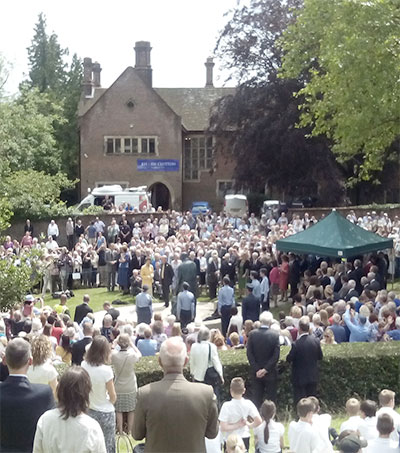 A bronze statue of plastic surgeon pioneer, New Zealander Sir Archibald McIndoe, has been unveiled by Princess Anne in East Grinstead, West Sussex, a short drive from Queen Victoria Hospital where he made his name.

In attendance were some of the 650 badly burned World War II veterans McIndoe treated and who he dubbed his Guinea Pigs.

The statue, of McIndoe treating a badly wounded RAF pilot, was sculpted by Martin Jennings whose father Michael was treated by the surgeon after being badly burned when his tank was hit in 1944.

McIndoe, who died aged 59 in 1960, developed new plastic surgery techniques and also cared for the psychological damage of burns injuries by making his patients face the outside world.

They were given such a friendly welcome by the people of East Grinstead that it was hailed as “the town that didn’t stare”.

Dr Sandy Saunders, 91, from Leicestershire, suffered severe burns to his face when his glider crashed at 90mph in a training accident in 1945.

After more than a year’s treatment he was sent to McIndoe who told him: “You need four new eyelids, your nose needs rebuilding and your eyebrows need to be done. Come in tomorrow and I will do your upper eyelids.”

Saunders said: “His character was such that you felt immediate confidence in him. He gave recommendations in a firm voice that you automatically accepted as the right course.

“I felt so inspired by McIndoe that after the war I pursued a career in medicine.”