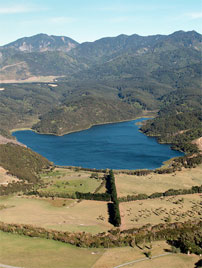 “It was ultimately New Zealand’s contemporary film culture that persuaded [American filmmaker-adventurer] James Cameron to shift his work life, in stages, toward the Southern Hemisphere,” Pete Nikolaison writes for The New York Times. “New Zealand film crews, he said, have a freshness and flexibility he no longer finds in the United States. ‘They aren’t the sort of third-generation people you find working on soundstages in a very jaded Los Angeles,’ Cameron said. Cameron has spent an estimated $20 million to buy 1100 hectares of farmland around Lake Pounui. He arrives with the promise of not just an outsider’s eye but also a new national brand and a next wave of employment for hundreds of New Zealanders who are expected to work on Avatar 2 and Avatar 3.”