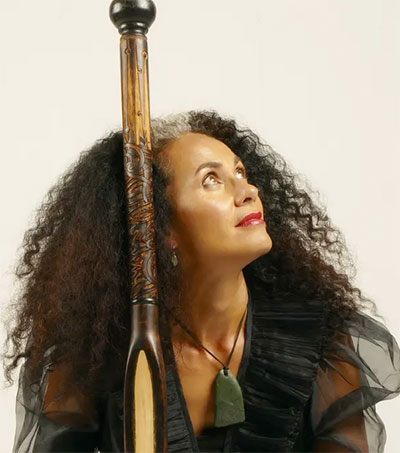 She blows in like a song carried on a powerful current: a wild-haired woman, larger than life, carrying a tall carved stick. She loses things in that hair, she says; finds pens in there days after they went missing, Guardian journalist Susan Chenery writes beginning a feature about New Zealand’s celebrated scholar poet Selena Tusitala Marsh.

A force of energy swirls around her as she sweeps into the Brisbane cafe, fresh from her daily 9km run. The stick is a tokotoko, a Māori symbol of status and authority, given to Marsh when she became New Zealand’s poet laureate in 2017. She carries it everywhere, a talisman not of war but of words, Chenery writes for the newspaper.

When Barack Obama got to touch it on a visit to New Zealand last March, he was more interested in how she got the tokotoko through security. “My husband said, ‘Can you take him [a photo of her with Obama] off your phone now? He’s been there for a year!’”

Now an associate professor lecturing in creative writing and Pacific literature, Marsh was the first Pacific Islander to graduate with a PhD in English from the University of Auckland in 2004. “What an insult to the supposed diversity of Auckland,” she says.

In 2019 Marsh was appointed as an Officer of the NZ Order of Merit for services to poetry, literature and the Pacific community. Her published collections – including Fast Talking PI, Dark Sparring and Tightrope – have been heavily garlanded with awards, and her work translated into multiple languages and across numerous forms, appearing in museums and parks and on billboards, even graffitied on to a wall in Avondale where she grew up. She also edits Pasifika Poetry, a website devoted to preserving and curating the work of poets from the region, and is co-chair of the South Pacific Association of Language and Literature. Mophead, an autobiographical work, will be published in October.

Marsh belongs to a generation that has seen poetry move away from a privileged white male enclave to something of a global revival: a short form of expression that is fluid, elastic and – as poets such as Rupi Kaur have found – can respond to events in an Insta world. “Because we are so attuned to soundbites of information, it is instant contact,” she says of the Instagram wave. “Those short, sharp, really punchy poems are in a multimedia [world] which can be circulated and forwarded.”

Even though she rails against the “unconscious bias” of towns where “the only Pacific Islanders you see are in the service industry”, she prefers subversion in her poetry, rather than overt anger. “Anger can come in many forms but it is not my natural way to be an angry strident voice. You can seduce someone to get your point across, or you can use humour.”