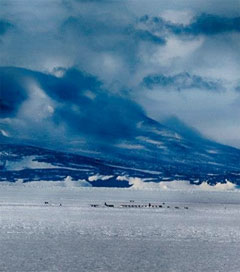 Air New Zealand is planning a demonstration Boeing 767 flight to Antarctica on 5 October, and if all goes well the airline is expected to operate two more chartered flights to “the ice” later during the summer.

The airline will fly one of its Boeing 767-300s from Auckland to Pegasus ice runway near McMurdo Station to determine the feasibility of using the jumbo jet to fly scientists and other support personnel to the continent. Both New Zealand and the United States maintain year-around research stations that would be served by the flights.

Each year more than 2000 scientists make the roughly 5000-km trip between New Zealand and Antarctica. Using the Boeing 767 would offer more seats over the military transports (more comfortable as well), and a longer range than other airliners currently used.

“This will fundamentally change our capability on the ice,” foreign affairs minister Murray McCully said. “Unlike the RZNAF 757s which currently fly to Antarctica, the Air New Zealand 767 can make a return trip without refueling.”

If approved for the charter flights, Air New Zealand will fly scientists and support personnel for both New Zealand and US Antarctic programs.