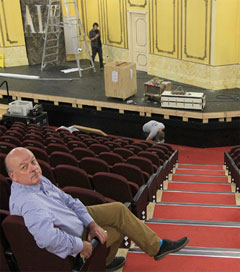 How the Court Theatre rose from the rubble of the 2011 Christchurch earthquake is described by its chief executive Philip Aldridge for the Guardian’s “Culture Professionals Network” series.

“[After the earthquake on the morning of 22 February] the buildings we occupied remained standing, broken but repairable,” Aldridge writes. “Our building is unusual. It is of significant historic interest and will, somehow, be saved. Vast swaths of the inner city, including churches, libraries, restaurants and offices – more than 1500 buildings – have now been demolished.

“New Zealanders are a pioneering people. It’s not that long ago that previous generations broke the land; hardy, practical, sports-mad, stoic people. In a crisis, what did they vote for with their money? In the face of the loss of all amenities, of nearly every school and sports field, every club house and every venue, it was the theatre that came back first.

“In a society where our entertainment and stimulation is increasingly consumed in a fractured, personalised form, theatre offers something increasingly rare: community. In times of crisis we value that above all else – the opportunity to hear music, share laughter, appreciate a higher plane and to do it together, as an audience.

“The city is still in crisis, but every night the theatre fills up. It is really quite dramatic.”

Aldridge recently spoke at No Boundaries in the UK, a symposium on the role of arts and culture in a world where there is no normal.