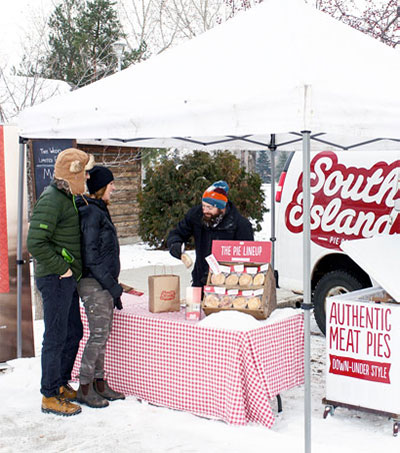 Jamie Scott was working as a printer in Edmonton, Canada, when his hunger for a classic Kiwi pie spurred him to start his own business, South Island Pie Co. Sue Hoffart interviewed Scott for a recent North & South article.

Originally from Christchurch, Scott landed in Alberta in early May 2006 and immediately donned several extra layers of clothing as hardy residents bared arms and legs because the thermostat had just scraped past single digits. A close friend from home had lured him north with the promise of a spare room and plenty of jobs. Sure enough, the 25-year-old found the oil-rich prairie province was booming, and he easily found print work as the city emerged from hibernation.

By June that year, Edmonton was abuzz. The home-grown Oilers ice hockey team had made the national play-offs and the manic summer festival season had kicked off. While the New Zealander was delighted to discover he could drink garden-bar beer in bright sunshine at 10pm, finding a decent meat pie proved impossible.

Within weeks, he was phoning home to ask for his nana’s bacon and egg pie recipe. He called home again for steak pie instructions, friends clamoured for more and he began to consider starting his own business.

“It took me years to figure out there was never a good time to do it,” Scott says. “I was going to end up retiring a grumpy old man because I had this dream and I never did it.”

So, in 2013, he marched off to his local farmers’ market with a small batch of pies. The ensuing years have seen his retail list grow to include more markets, food fairs, gourmet butchery stores and, most recently, the shockingly vast West Edmonton Mall.

In December, Scott clocked up two new experiences. He smashed his personal baking record, filling 1200 flaky pastry shells in a single week, and he made his first moose-meat pie.

“My goal is to get the pies into supermarkets. We’ve already had a bit of local press and that helps. We were voted among the top 100 things to eat in the city by local foodie magazine Tomato,” he says.