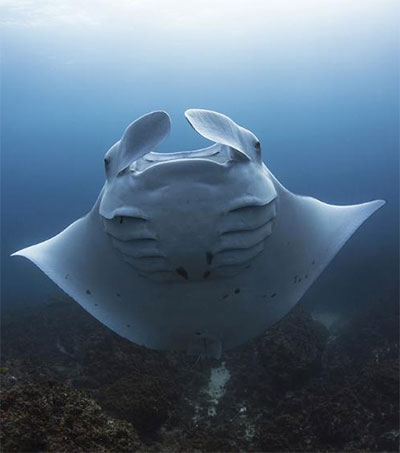 “I didn’t choose to be an underwater wildlife photographer, Draper said, “But I’ve always been around the ocean though and two years ago, I thought I’d invest in a water housing case and start taking photos of surfers. It was so nice to be in the water everyday and refreshing to be away from the construction site.”

Draper’s interest shifted from photographing surfers to wildlife after he accidentally came across local turtles while swimming. From there, his hobby turned into a passion: He moved from New Zealand to Sydney’s Byron Bay, took up freediving, and began venturing out to find marine wildlife to photograph.

As a freediver, he doesn’t use scuba diving gear to photograph animals, instead capturing all of his photos by simply holding his breath. He has captured some of Australia’s greatest marine wildlife, including humpback whales and Great White sharks. He has also photographed wildlife in Hawaii, the Kingdom of Tonga, New Zealand and Indonesia.

“I’ve now travelled around the world photographing a variety of pelagic wildlife,” he said. “I love the silence underwater, the fact that I am interacting with some of the most amazing creatures everyday.”

Draper hopes to help spread awareness about environmental issues affecting the sea and ease people’s fear of the ocean. “My goal is to change fear to fascination through my images and art,” he said.

Original article by Simone M. Scully, The Weather Channel, May 5, 2016.