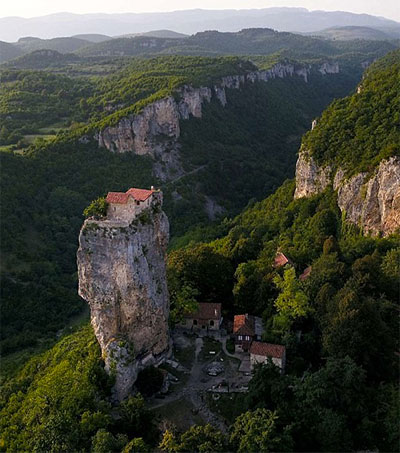 One Last Time Over Georgia is set to be the final photographic recording of the country from above.

For the past four or so years, the use of drones, which hover in the sky but are operated by people on the ground, have enabled the making of some extraordinary aerial photographs.

However, following growing security and privacy concerns, new laws have been enforced across the world limiting their use.

Georgia is one of the last countries to allow drones to operate freely in its skies.

Chapple is one of the early pioneers of drone photography, and he headed to Georgia with a high-end quadcopter to make one last aerial record of Georgia before the new rules come into force.

“The results are stunning …” Martha Alexander reports for the Daily Mail.

According to Chapple’s website, he began work at New Zealand’s largest daily paper in 2003:

“After two years chasing news I took a full-time position shooting UNESCO World Heritage sites. In 2012 I went freelance but kept up the travel. Since then I’ve been published in most major news titles around the world.

“After near constant travel through more than 70 countries I’ve seen almost nothing but kindness, decency and beauty. I have great respect for photojournalists working in conflict areas, but I believe there’s much we haven’t lost or destroyed which warrants an honest representation in news media.”