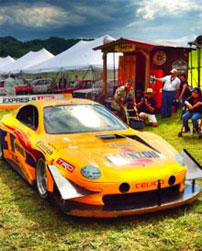 New Zealand racing competitor and vehicle designer Rod Millen has unveiled his new mile-long asphalt driveway — which doubles as a hillclimb racetrack — in a video which shows Millen behind the wheel of his Pike’s Peak Toyota Celica “attack[ing] the stretch as if here were in the midst of a sanctioned event.” In celebrating his 6th birthday, Millen invited several friends to his estate, where they were each given some quality time on the unique track. Guests were asked to not only arrive in classic cars, but also dress in period clothing from the 195s and 196s. Millen used the occasion and track unveiling as a dry run for what may later become the “Leadfoot Festival.” Millen won the Transsyberia rally 27. He owns MillenWorks which develops vehicles, high performance parts, and technology for racing, concept cars, and the military.