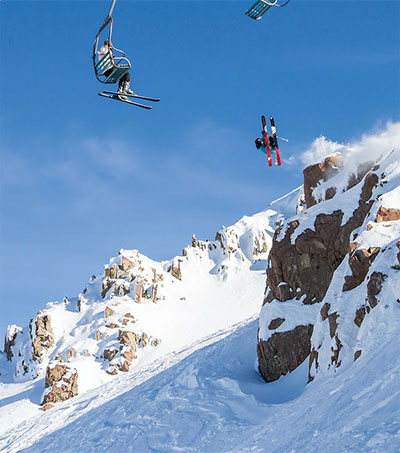 Ohau We Love to Ski Here

The tiny Mackenzie High Country ski resort of Ohau has just one lift, but the snow in August and September is brilliant – and, if you pick your week, it can feel like your own private mountain, according to the presenter of BBC2 series Ski Sunday, Ed Leigh.

“It’s an adventure just getting to a New Zealand ski resort, let alone actually skiing there. There’s not a lot of infrastructure in the Southern Alps. You have to make your way there up windy roads, often with no barriers,” Leigh says.

“On paper, Ohau looks about as archaic and one-dimensional as it comes. It’s got one chair lift and a couple of little drag lifts for beginners. Even by New Zealand standards, it’s quite unknown. But in late July, August and September, Ohau has something very, very special.

“Ohau is where I took my kids to learn to ski. It’s super easy and safe, but there’s lots of different terrain and it all just rolls back to this one lodge. You know that whatever happens to them, even if they have to slide, they’ll end up head-down at the bottom of the hill.

“The entire resort is run by one family, the Neilsons. Louise and Mike are the parents and their sons and daughters do various things at the lift, the restaurant or the lodge. The lodge sits right on the lake, with wonderful 1970s architecture. It’s all wood but really well-insulated, with glass around the north and east sides, so you can look over the lake and up to Mount Cook.

“You haven’t got any choices in Ohau, so it’s gotta be good. You’re an hour from the nearest town but there’s everything you want there: hot tubs, mountain boats, walking, skiing and snowboarding. And the food, included in your accommodation, is all locally sourced and really good.

“There’s a week in August when the US ski team use Ohau as their base. The lodge only has 100 beds, but 70 of them will be filled with ski techs, ski testers and a couple of big-shot racers. But they all spend their time on one piste, which they prepare for racing, and the remaining 30 guests share the rest of the mountain. On that week, it can feel deserted, like your own private ski resort.”

Original article by Will Coldwell, The Guardian, October 7, 2016.