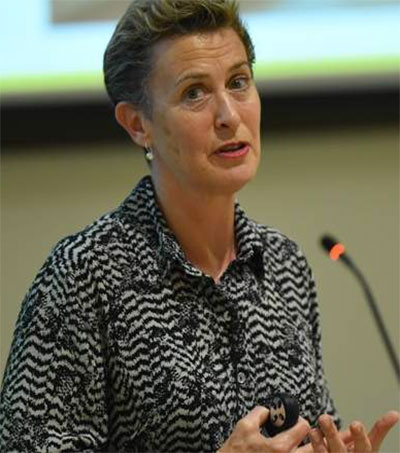 In 2005, New Zealander Kathy Tracey, along with three women from the UK, pitted themselves against the might of the ocean on a 4700km historic journey. The now 56-year-old founding partner of Thinking Spaces was in Abu Dhabi recently for leadership talks held at New York University Abu Dhabi Institute (NYUAD), where she shared her incredible story with young students.

There were a total of 24 boats of men and women competing in the race, which began in Antigua in the Caribbean.

By the end of the race in early 2006, only 16 boats remained. The crew remained entirely self-sufficient for the duration of the journey, which lasted for 67 days, seven hours and 20 minutes.

“We faced some very ferocious weather, huge storms and massive waves that were threatening to capsize our boat many times,” Tracey told the Khaleej Times. “The weather was so rough that many boats had to be abandoned.”

Despite the women having years of experience in rowing, many people believed that there was no way they would win the race.

“I was in my 40s and people thought that I was too old, too short and not athletic enough. Many people believed we weren’t going to achieve it. But with perseverance, we got through every hour.

“We often beat ourselves up for our failures in life. Sometimes we are our own worst enemy. But we should celebrate our little successes along the way.”

Tracey is a Master Practitioner of Systemic Team Coaching (AoEC, London) and holds an Advanced Certificate in Executive Coaching at Masters Level from the University of West England.

She represented New Zealand in the 1986 World Kayak Championships in Montreal, and won a silver medal at the Commonwealth Kayak Regatta the same year.