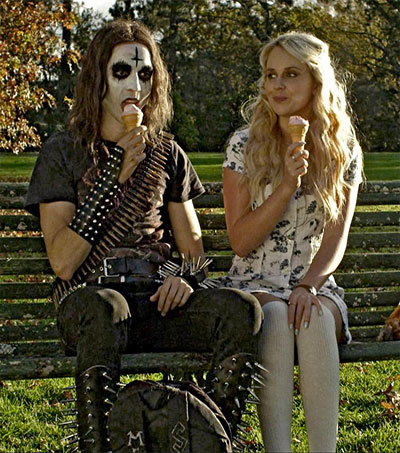 Obviously Deathgasm Is a Family Film

“Making his feature directing debut after several years on the FX teams of such films as The Avengers and The Hobbit, New Zealander Jason Lei Howden delivers a pic that will play very well to genre buffs and good-humoured embracers of metal’s cathartic power; Neil Sedaka fans need not apply,” Hollywood Reporter John DeFore writes in a review of Deathgasm.

“Milo Cawthorne makes a sympathetic misfit as Brodie, who has been transplanted from a chaotic home (his meth-head mother was arrested for fellating a shopping-mall Santa, he proudly tells us in voiceover) to the small town abode of his God-fearing and very square aunt and uncle. Here he suffers that fate worse than death – being adopted by his new school’s two D&D nerds – until meeting Zakk (James Blake), a badass who’s as into terrifying guitar rock as he is.

“Howden recently told an interviewer he wanted to reestablish the ties between horror movies and metal, and to cram his own flick with “REAL Metal: Brutal Death Metal, Thrash Metal, Black Metal, Doom Metal.”

“Certain scenes, especially those involving chainsaws, approach the antic pitch of early Sam Raimi, but even when he’s not delivering on the comedy front Howden provides much for splatter-hounds to appreciate. And the soundtrack is the stuff of adolescent wish-fulfillment, full of head-thrashing bombast that suits the pentagrams and portentous Latin texts perfectly.”

In another review of the film, this time from the New York Times, Anita Gates writes that Deathgasm “has its charms”.

“It’s easy to empathise with the handsome young protagonist, Brodie,” Gates says. “[Kimberley] Crossman is appealing, too, as Medina, who shows up with a big ax at the appropriate times and inexplicably knows how to use it. In between the rampant four-letter words and the occasional partial nudity are likable attempts at humour – some sweet, some saucy.

The film premiered earlier this year at South by Southwest.