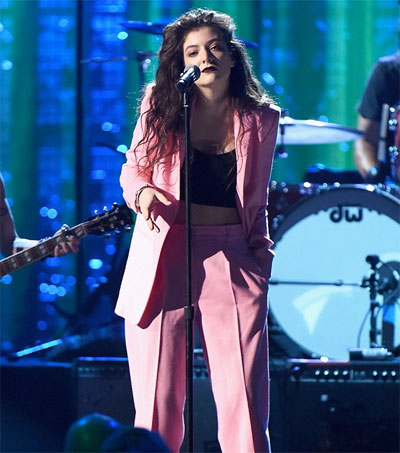 Lorde, who performed Nirvana’s All Apologies at the band’s Rock and Roll Hall of Fame induction, may not have seemed like an immediate choice for the evening, but then Ella Yelich-O’Connor is not your typical chart-topper, Ben Travis writes in the Guardian.

“Lorde champions unconventional beauty and creates songs that make a typically punk-like point of calling out the unattainable materialism of her peers. Also, as much as Nirvana were always purveyors of noise, peek behind the curtain of all that distortion and you find big, glossy pop melodies, something both artists share a fondness for.”

Lorde, 17, recently performed in Mexico City. She continues her North American tour before returning to the Southern Hemisphere for dates in Australia.

At this year’s Grammy Awards, she won both Song of the Year and Best Pop Solo Performance for her debut single “Royals”.