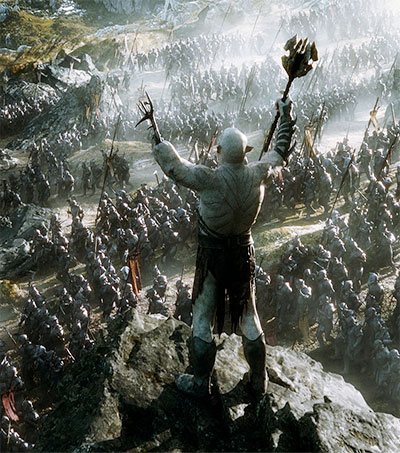 “Just as there are nine members of the Fellowship, here are nine things we have learned from Peter Jackson’s six-picture behemoth …” Guardian journalist Ryan Gilbey gives us the rundown.

“It’s big. But how big? $1.6bn and counting doesn’t look too shabby for five films — with one yet to open.

“Good things come to audiences who wait … In this Netflix-fixated age of instant gratification, the Lord of the Rings and Hobbit trilogies did something both antiquated and radical: they restored to cinema-going the old-fashioned thrill of the serial cliffhanger.”

“Take the risk,” Gilbey writes for number 3. “Other parties had tried to adapt Lord of the Rings, including the Beatles.”

And, “it almost didn’t happen …

At five, Gilbey says we have learned to “go large.” “To flesh out the world on screen, Jackson incorporated Tolkein’s notes, appendices and, quite possibly, his discarded shopping lists and telephone doodle-pads.”

“There are parts of the world that have yet to be seen on screen. One of the revelations in these movies has come in the form of eyefuls of handsome New Zealand landscapes previously unexploited in cinema. And the movies have done wonders for the country’s tourism industry.”

With Andy Serkis’s “formidable” performance as Gollum, we have also learned an actor doesn’t have to be visible to give a great performance.

At eight, we now know, “special effects aren’t always special”, according to Gilbey.

And finally, the saga has taught us: “There are as many Lord of the Ring/Hobbit drinking games as there are characters.”

The Hobbit: The Battle of the Five Armies opens this week in New Zealand and in the US on 17 December.

Tags: Andy Serkis  Guardian (The)  Hobbit (The)  Lord of the Rings  New Zealand  New Zealand landscapes  Peter Jackson  The Hobbit: The Battle of the Five Armies