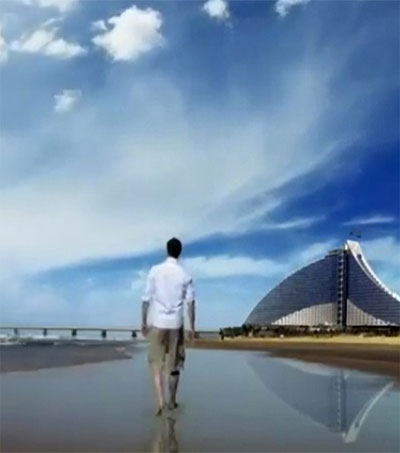 Online response to a film charting Dubai’s growth since just before 1979 has almost been as remarkable as the development it depicts, according to the National’s Nick Leech. The film is made by New Zealander Nigel Hunt, chief executive of Black Rabbit Agency Group (BRAG), a London-based media company that specialises in computer-generated visualisations.

Thanks to 1.7 million views, more than 2000 shares and more than 5600 likes, the film briefly earned itself a place in Facebook’s trending list, a chart normally reserved for comedic videos and celebrity antics.

In 2010, BRAG had been asked to “make a city” for the two-minute show reel of a new BBC TV mini-series Supersized Earth, that would tell the story of how humanity has “redesigned our planet to build the modern world”. Hunt turned instinctively to a city he knew well, Dubai.

“We looked at cities in Asia, but from my experience in the Gulf, Dubai was the most eye-catching because in just 20 years plus you could look at it and see what it had achieved,” Hunt, a former architectural designer, explains.

For Hunt and the other fabricators of Dubai’s modern identity – the architects and planners, developers and estate agents – images and storytelling are the only meaningful way to envisage the future and to visualise the Emirate’s most grandiose ideas.

“It’s more than just architecture,” the special effects man insists. “This is about selling dreams.”