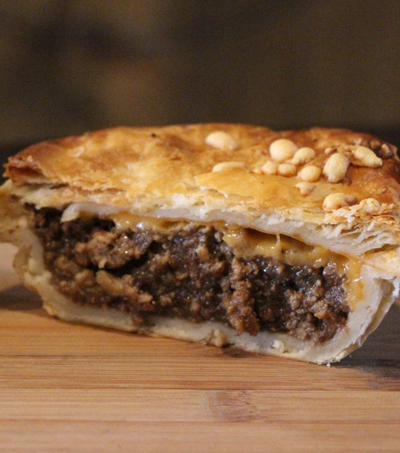 “As an expat returning home to New Zealand for the first time in more than a year, I need to eat a pie,” writes Lynda Brendish in an article for Ozy.

“Pies in New Zealand aren’t like the sweet, sugary ones in America, where I live now. They’re also not quite the cousin of Cornish pasties in the U.K. Our pies are hand-size puff-pastry pockets of piping-hot savory fillings — just the right size to eat from a paper bag as you drive, and hearty enough to sustain stocky tradespeople at lunchtime,” she writes.

Pies in New Zealand are available at every bakery, convenience store, petrol station and most cafés and you can usually find them with old-school fillings: mince (ground beef) and cheese, steak and cheese, chicken, potato top. “Immigrant communities have also added their own spins, expanding the pantheon to include flavors like butter chicken, Thai red curry and more.”

So what makes a good pie? “The pastry’s got to be baked well, not too thick. It’s got to have a nice appearance,” he says. The pastry should be “flaky, but not too flaky,” and the meat-to-gravy ratio and seasoning have to be just so,” according to Brent Kersel, managing director at Bakels New Zealand, which supplies the majority of bakeries in the country with pie-making ingredients.