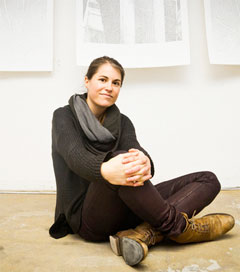 “When a German realises you’re a New Zealander … they often can’t quite seem to believe it, the implication of the questioning being ‘You’re from New Zealand! Why would you ever want to leave? And why would you choose to come here?’” Wireless contributor, Berlin-based Ryan Eyers writes.

“While everyone has their own motivations for leaving home, the reasons given by new Berliners for living in the unofficial new capital of Young Europe tend to be a bit more uniform: cheap rent and low living costs that allow for a more flexible way of life; the opportunity to pursue obscure interests in an expectation-free environment; near-perfect geographic positioning that means that Copenhagen is as close as Prague; and a general sense of possibility that pervades the city.

“Someone who finds no shortage of motivation and stimulation in such a permissive and encouraging atmosphere is Nicky Broekhuysen (pictured), 32, an artist who has been living in Berlin since 2008, following two-and-a-half years in Shanghai.

“She appreciates the higher level of general interest in art, noting that ‘in Germany, they are super appreciative of culture … it is a huge part of their life, they’re taught to really value that as children’.

“Although former Hamiltonian [Shannon Campbell has] been in Berlin for just over ten years, [he] didn’t set up [his] café [The Dairy] until 2011, after he decided to take advantage of the relative ease of setting up a business in Berlin.

“Campbell made a conscious decision to integrate into the local community, heading straight to German school every day for six months.

“As much as he misses ‘really ordinary things like light, and smell, and the taste of things’ … he stays connected [to New Zealand] by going to see kapa haka groups when they pass through Berlin [and] visiting the marae in Hamburg.”

According to recent figures released by the German Federal Statistics Office, at least 530 New Zealanders live in Berlin.