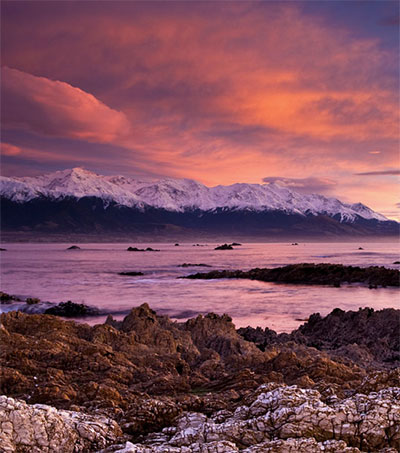 The main experience you are left awestruck with after a trip to New Zealand, according to the Huffington Post, is “the nature – the overwhelming force of the landscapes.”

“New Zealand is one of the world’s youngest countries, the last major land mass to be settled by humans. It’s incredibly isolated – the closest neighbor is Australia, 900 miles away – and slumbered undisturbed for some 100 million years. In part, the drama of its vistas is shaped by its volatile location, straddling the Pacific and Indo-Australian tectonic plates and right on the ‘Ring of Fire.’

“Upon first arriving, you are constantly searching for comparisons: a mountain range that reminds of Colorado; a luscious fern forest that recalls Hawaii; stretches of farmland that bring to mind southern Germany; a road lined by poplar trees the spitting image of southern France. But the truth is, your mind is just straining to make sense of something that doesn’t compute: the fact that all these different landscapes are converging in a single place – and one that’s smaller than Japan to boot.

“Whether you’re experiencing the grandeur in an over-the top way (lunch on a glacier; heli fly fishing) or in smaller moments (kayaking in Fjordland; hiking in the wilds of Glenorchy), you cannot help but feel the intense power of nature wherever you go in New Zealand. There are lots of beautiful outdoorsy places that I love in the world: expansive Utah; evocative Iceland; lush Kauai. But nowhere else have I ever been so utterly dumbstruck by nature, so enamoured with the wonder of this Earth, so conscious of my own insignificance in the face of it.”