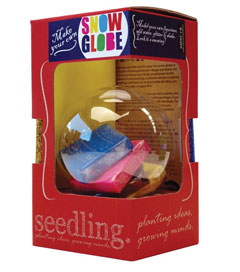 A New Zealand toy, The Snow Globe, is one of the world’s top ten ‘best creative toys’, according to  Britain’s Independent newspaper. The ‘Snow Globe’ is made by Seedlings, founded in 2006 by Phoebe Snow. Phoebe was struggling to find great gift ideas for her children. So she decided to make her own. She began in a small room with just four products. She now employs more than 30 people in Auckland and her company sells over 250 products. Seedling’s has won numerous awards and is recognised worldwide for its creative and innovative craft and science materials. ‘Seedling is a truly inspired New Zealand-based company that focuses on getting kids to explore, discover, grow and create, ‘ said The Independent.