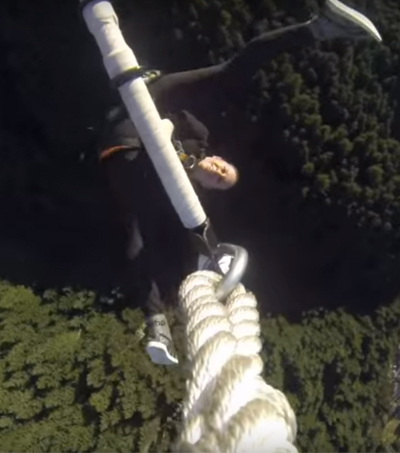 Anna Cochrane, a New Zealand paramedic, has performed a static trapeze act while suspended on a hot air balloon at an altitude of more than 3,000m, in a bid to break the world record, as reported on BBC.com.

She performed for more than five minutes while hanging from a hot air balloon in the skies above Ashburton.

“It’s not really a physical challenge by the time you do it, just a mental challenge, to stay calm and focused and relaxed enough to do what your body can do. There’s no way of knowing how you’ll react until you’re up there,” said Cochrane.

Her attempt is even more impressive knowing that she dislocated a rib while hanging from the balloon.

It took her one year to prepare for the record attempt during which she raised money for charity. When she injured a rib, she had to make changes to her performance and improvise to avoid puncturing a lung.

“I’m a paramedic, so I assessed myself while hanging upside down,” she said.

“I thought, there’s definitely something wrong, but I can breathe OK, and I have spent this long trying to be here.”

If confirmed, she will have smashed the record for the highest static trapeze act, which currently stands at 662m (2,171ft) and was set in China in 2008. Guinness World Records says it is reviewing the evidence for the latest attempt, a process that can take several weeks.