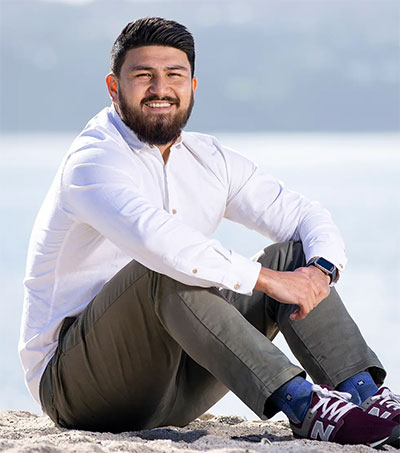 New Zealand Gave a Home and Hope to Abbas Nazari

Abbas Nazari was stranded on a ship in the Indian Ocean when he first heard the words “New Zealand”, Dunedin-based journalist Eleanor Ainge Roy writes for UK newspaper, The Guardian.

Then aged seven, Nazari’s mother, father and four siblings were among 430 asylum seekers, predominantly of the ethnic minority Hazaras of Afghanistan, plucked from a sinking fishing boat by the Norwegian cargo ship, the Tampa. They were later transferred to the HMAS Manoora, where they waited for asylum after Australia refused to accept them; creating an international quagmire over which country would, or should, offer sanctuary on humanitarian grounds.

Australia was in the midst of an election and many analysts believe the Tampa affair helped John Howard retain government. Nazari says Howard used the lives of the Tampa refugees to set a hardline example of his zero-tolerance approach to boat people.

“Australia was always the destination, we hadn’t even heard of New Zealand. A lot of people packed up and left thinking that it was the promised land. In our particular case they made a strong point of saying ‘no, you’re not welcome’; and they used us as an example to get that point across,” Nazari tells the Guardian.

Nazari’s family had travelled for six months via Pakistan and Indonesia, searching for asylum. In Afghanistan the minority Hazaras were persecuted and executed by the Taliban.

Last week Nazari, a first-class honours graduate of international relations and diplomacy from the University of Canterbury, was awarded a prestigious Fulbright scholarship, granting him a year’s postgraduate study at Columbia University in New York. The scholarship was awarded just days before World Refugee Day, marked around the world.

Nazari, 23, says the intense scrutiny that has come with his achievement mildly bugs him, with its suggestion that his academic nous is somehow exceptional, rather than a broader indicator of the potential of all refugee kids to thrive when given a chance.

Nazari first learned English at the Mangere Refugee Resettlement centre in Auckland, weeks he remembers for the “stable ground” beneath his feet, regular meals and the lifelong friendships formed with other Tampa kids. Then, his parents – a stay-at-home Mum and a truck-driver Dad – were flown to the South Island with their five children to settle into a state house in Christchurch. Waiting at the airport was a huge contingent of locals to welcome them – warmth and acceptance that Nazari says set the tone for the family’s new life in New Zealand.

Nazari, who speaks Farsi, English and is learning Te Reo, leaves for New York in August. He has no five-year plan, no idea of what he’d like to do or where he’d like to work, but storytelling appeals. Turning people’s preconceptions of a refugee’s life and potential on its head is something of a passion for Nazari.

“Yes it [the Fulbright] is the result of my own individual hard work and I’m not going to shy away from that, but I really want to emphasise that me being given this opportunity now allows others kids who might look or sound like me to be like ‘hey, I can do that. I can put my name in the ring. I can apply for that’,” says Nazari.

“When I look up at positions of leadership in sports, academia and business and culture, there’s not many folks who have a story like mine or look like me or who come from the same background I have. I’d love to set the foundations for more migrant, refugee and ethnic background kids to feel the door is open for them.”