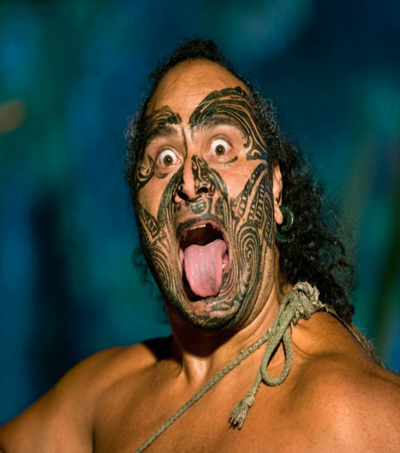 “Can you imagine NBA players performing a Native American grass dance in an act of team solidarity and national unity? In New Zealand, no one bats an eye,” writes Morgan Godfery in a significant feature piece for The Guardian.

When the New Zealand basketball team performed a haka before their game against Team USA at the Basketball World Cup last month, the Americans were taken aback.

The traditional Maori challenge, and footage of its performance went viral. Not because of the act itself, the haka having long been a pre-match ritual among New Zealand sport teams, but because of the slack-jawed reaction from the American players, including Derrick Rose and James Harden.

“We knew that was a really neat thing to do and it’s part of their tradition”, coach Mike Krzyzewski explained, “and we admire that.” But while news organisations scrambled to upload the video along with pithy copy, an important angle was missed.

While one team is proudly celebrating its heritage, the other responds with confusion. It is a situation that is scarcely imaginable in reverse. Can you imagine NBA players performing a Native American grass dance in an act of team solidarity and national unity?

The differences extend beyond cultural kitsch. The political comparisons between Indigenous cultures in the two countries are startling too. New Zealand enjoys a state-funded Indigenous broadcaster, Māori Television, the US does not.

New Zealand enjoys dedicated indigenous representation in its national legislature, the US does not. The Maori party holds ministerial positions in the New Zealand government. At the federal level, there is no Native American equivalent.

The contrast between the Treaty of Waitangi and the treaties signed in the American west are profound.

In New Zealand, the constitutional narrative is built on the Treaty of Waitangi, writes Fulbright scholar and legal academic Claire Charters, which means that Maori and state relations are central to New Zealand’s understanding of itself.

While indigenous peoples in the US and New Zealand suffered similar catastrophes during and after the “opening” of the American west and the pacification of Māori resistance, one country’s treaty emerged as central to public and legal life while the other country’s treaties remained marginal.

While New Zealand commemorates Waitangi Day, much of the US observes Columbus Day – a day of tragedy for the Americas’ indigenous peoples. In New Zealand, the Māori discourse is central to the national discourse.”

That much was clear during Prince William, Kate and baby George’s tour of New Zealand. When the royal family was welcomed to Wellington with a pōwhiri – a Maori welcoming ceremony – the New York-based CNN reporter Jeanne Moos filed a story asking whether a pōwhiri is “any way to welcome a future king and queen”.

Moos exhumed archival footage of a pōwhiri for Laura Bush and recited an earlier description of the ceremony as a cross between “a Chippendales lap dance and the mating dance of an emu”.

New Zealanders were outraged by the journalist’s crass ignorance. Moos’s report was criticised in both New Zealand’s indigenous and mainstream media.

Eighteen year-old Jayden Evett started a Change.org petition calling for Moos to publicly apologise, gathering 25,000 signatures. Although “the Māori mediasphere” – as Folker Hanusch puts it – has not been a cure-all, it grants indigenous communities the power to offer a counter-narrative.

The same cannot be said about the US, where indigenous media have too little sway in the public discourse.

One of the lessons to be taken from New Zealand that is more fundamental than the efficacy of indigenous media and the power it has to offer an alternative narrative. But there is a more important lesson to be learned from the treatment of indigenous people in New Zealand.

“While New Zealand is thinking about Māori as indigenous, [the United States] is thinking about Native Americans as a racial group,” says Alice Te Punga Sommervile, an Ivy League graduate and lecturer in Pacific literature at the University of Hawai’i at Manoa.

Yet while recognising the distinction between race and indigeneity is a lesson to take from New Zealand, it also reveals the difficulties with a comparative exercise. If New Zealand privileges indigeneity and the US privileges race, then any comparison becomes an apples and oranges moment.

Rather than searching for lessons from overseas, an exercise that risks robbing Native Americans of their agency in indigenous development, perhaps the key is to privilege indigenous perspectives.

Treaties, and that includes treaties with Native Nations, are part of the constitution. That means freedom, liberty and self-determination for Native Americans is more than an ancient promise, it is the supreme law of the land.

The article is widely debated in over 250 comments, many suggesting that comparisons between US and NZ circumstances are not valid, and others point out New Zealand’s sketchy position on institutional racism, with, for example, 51% of New Zealand’s prison population being Maori.