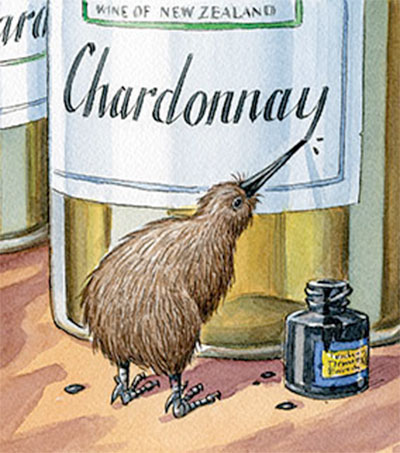 “Auckland, on the same latitude as southern Spain, may seem an unlikely location for vineyards capable of making precise ripostes to white burgundy,” British wine critic Jancis Robinson writes for the Financial Times. “But Kumeu River’s vineyards in the suburbs of the city are cooled by ocean influence, and summers can be cloudy.

“‘For us, 30C is a really hot day; as a result, the acidity remains high,’ says Michael Brajkovich, Kumeu River’s winemaker (and one of the first non-Brits to qualify as a Master of Wine).

“A recent blind tasting of Kumeu River chardonnays back to 2007, comparing them with some of the finest white burgundy equivalents, suggests that [New Zealand] chardonnays – at least from this top producer – can more than hold their own. As for value, they won hands down, costing a fraction of the wines they trounced.

“The tasting was organised by Stephen Browett, owner of fine wine trader Farr Vintners, who has been selling Kumeu River wines since he first visited New Zealand in 1990. [Brajkovich’s] brother Paul was in London on a sales trip and participated in the blind tasting, but had to be silenced for fear that his scores out of 20 for his own wines (consistently 20) would influence us.

“Every one of the Kumeu River wines was fresh as a daisy and clearly had a glorious future ahead of it. Paul Brajkovich claims that their single-vineyard 2004 chardonnays are in the peak of condition at 12 years old. (He also cited 2010 and 2007 as especially impressive vintages.)

“We didn’t even bother tasting the Niellon village Chassagne-Montrachet 2012 because it was so obviously affected by cork taint. One major difference between all these white burgundies and the Kiwi upstarts was that Kumeu River switched completely to screwcaps in 2001 after having to recall 600 cases of 1998 cork-tainted chardonnay from the United States.

“The good news is that although 2010 was a remarkable vintage for New Zealand chardonnay, 2014 promises to be the best yet, and will be released on export markets next year.”