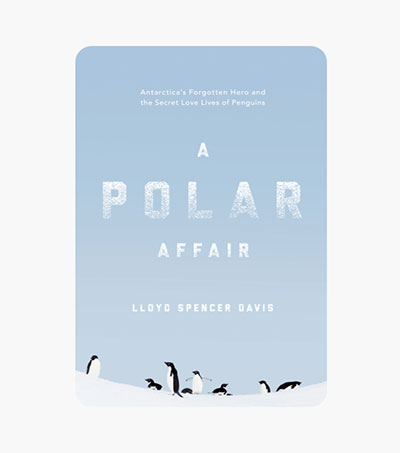 Napier-born Lloyd Spencer Davis is an award-winning scientist with many Antarctic field seasons behind him, Sara Wheeler writes for The Wall Street Journal. Wheeler reviews Davis’ new book, A Polar Affair: Antarctica’s Forgotten Hero and the Secret Love Lives of Penguins for the publication.

“Penguins are nature’s satire on humanity, which is why we love them. In A Polar Affair, an interesting blend of polar history and natural history, penguin biologist [Davis] weaves his own story with that of George Murray Levick, Captain Robert Falcon Scott’s top penguin man,” Wheeler writes.

“Levick, was born in the north of England in 1876. He was a doctor who accompanied Scott on the latter’s second expedition to the far south, the one that sailed from Cardiff in 1910 and ended in disaster when five men, including Scott, perished on their return from the South Pole, having been beaten to 90 degrees south by Roald Amundsen’s Norwegian team.

“More or less by serendipity, Levick turned his attention to zoology when he reached the ice, becoming the world’s first penguin biologist.

“The reader witnesses the emergence of that biologist. The author tracks down Levick’s unpublished manuscript recording the sexual habits of Adélie penguins – unpublished, apparently, on account of the prudery of the times. Homosexuality and necrophilia were rife in those pungent bird colonies, and Levick disguised the naughty bits by writing in Greek script, which the wily Davis duly deciphers.

“There is plenty of gripping information here about the habits of the hapless Adélies, notably their breeding, which takes place from late October to late January. These passages are the best in the book. When a pair of birds meets, they ‘trumpet loudly in unison, standing breast to breast, their bills pointed skyward, waving their heads and necks about each other’. The author discovers that, contrary to scientific opinion, the birds are not monogamous. Males, it turns out, are so undiscriminating that when Davis and his team place a toy penguin on the ice, ‘the males practically line up to mate with it’.”

Davis lives in Dunedin. He currently holds the Stuart Chair in Science Communication at the University of Otago where he teaches creative nonfiction writing and science communication.