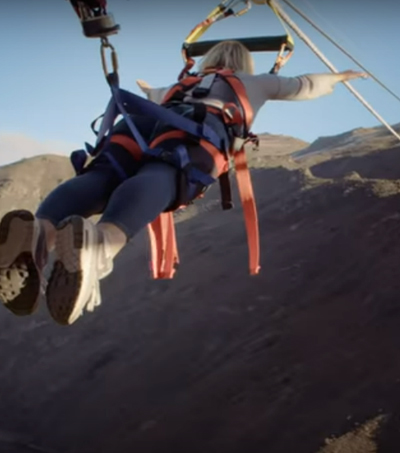 “Adrenaline junkies can now be catapulted to 60mph in 1.5 seconds across a 500ft ravine thanks to an amazing world-first bungy experience,” writes Jennifer Newton in an article for The Daily Mail.

“It’s called the Nevis Catapult and gives thrill seekers the experience of 3G of force as they are propelled over the remote Nevis Valley near Queenstown, New Zealand, before suddenly dropping towards the valley floor and experiencing a series of jaw-dropping bounces.”

“Co-founder of the company Henry van Asch says he first came up with the idea when travelling around France during the 1980s with friend and (later) Bungy co-founder, AJ Hackett,” writes Newton.

“’It’s a pretty unique feeling, surprising even. There’s nothing else quite like it,” he said.

“In 1988 we took Bungy to the world, and put New Zealand on the world adventure tourism map. Thirty years on it’s wonderful to still be pushing the boundaries globally.”

“Specialist new technology for the multi-million-dollar catapult was developed with the company’s research team before being built in an accredited testing facility in Christchurch.”

“The Catapult is, as far as the company knows, the only extreme adventure tourism experience globally to carry the highest world standard safety system – ‘Sil3’ Safety Integrity Level,” according to the article.

“AJ Hackett Bungy New Zealand is the epitome of the Kiwi entrepreneurial spirit and their investment in cutting edge technology and new thrills is an example of how New Zealand continues to be at the forefront of adventure tourism,” said Tourism New Zealand Chief Executive Stephen England-Hall.

“Something like this could never have been accomplished without a combination of creativity, daring, sheer Kiwi craziness and of course investment in years of design engineering and testing.”