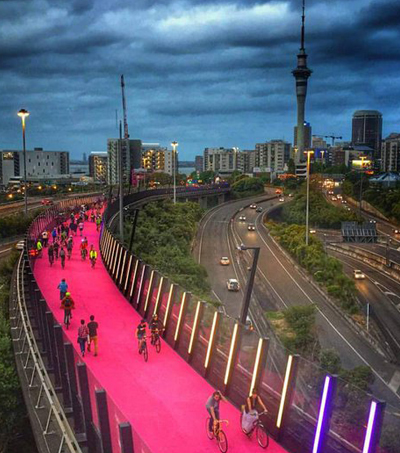 “The 0.37-mile offramp turned bike path cuts through the surrounding asphalt like a pink ribbon, a bold and unconventional piece of urban infrastructure if there ever was one,” writes Kristin Hohenadel.

When she asked the designers why they chose that particularly vibrant shade of pink for the bike path known as “the Light Path”, partner Dean Mackenzie replied:

“From the outset we wanted something extremely vivid to contrast against the highway network it passes through.”

He said that they wanted to pick a color that didn’t connote a bus or typical bike lane.

“Pink is a colour that a lot of people seem to be afraid of using (and hence not commonly used) and we also felt looked beautiful against black.”

“Mackenzie said that they approached the project as ‘a citywide artwork’”.

In addition to its unique colouring, 300 individual LED light poles were installed at the eastern edge of the bike path “to create a programmable interactive “spine” that transforms the space at dusk.”