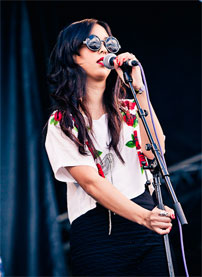 Auckland band The Naked and Famous, together with Metronomy and Wu-Tang Clan, helped open this year’s Glastonbury music festival. Bass player David Beadle talked to NME ahead of the Pyramid Stage headliners U2. “I haven’t listened to U2 in a long time, but they’re an enigma, everyone grows up listening to them,” Beadle said. “Bono’s never really been an idol in terms of frontmen for any of us. We’re more alternative rock, we prefer a nihilistic, depressed singer.” Some fans are looking at The Naked and Famous as natural heirs to the psych-pop of MGMT, who have also previously played Glastonbury. “We understand the comparison, but for us the similarities are very surface level. We’re influenced hugely by 1990s alternative rock and we feel that comes through very strongly in [Passive Me, Aggressive You].”