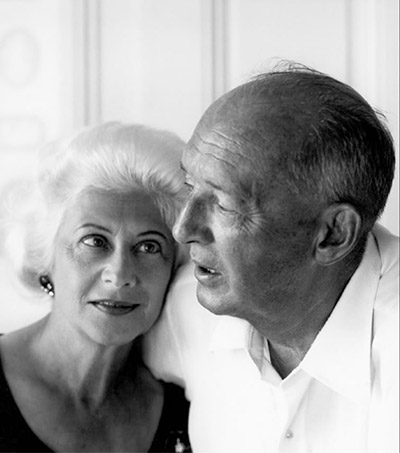 University of Auckland Professor and definitive Vladimir Nabokov biographer Brian Boyd this month published Letters to Véra, the first complete volume of the author’s letters to his wife. Edited and translated from the Russian by Boyd and Olga Voronina, the epistolary volume tells the story of the 52-year companionship between the author of Lolita, Pale Fire, and Speak, Memory, and the remarkable woman he refers to across these pages as my sun, my soul, my bird, my sweetheart, my pink sky, my sunny rainbow, my little music, my inexpressible delight, my softness, my tenderness, my lightness, my dear life, my dear eyes.

They met in their early twenties in 1923 while living among Berlin’s 400,000-strong Russian émigré community “notable for its cohesion, its material penury and its intellectual wealth,” in the words of Martin Amis, reviewing the collection for The New York Times. In something like a scene out of a Nabokov tale, Vlad met Véra at a costume ball where she beguiled him with hours of conversation and intimate knowledge of the young poet’s work while refusing to lower her black harlequin mask. The couple married in the spring 1925; their only child, Dmitri, arrived in 1934. (An opera singer, racecar driver, and executor of his father’s estate, Dmitri’s life is itself worthy of fiction.)

Arranged and annotated by Boyd with, according to Amis, “terrifying assiduity,” the volume of correspondence is both one-sided (Véra destroyed all of her letters) and “unavoidably bottom-heavy.” Some 450 pages cover the years 1923-1939, while only a mere 80 pages are devoted to 1941-76, the years during which Nabokov taught at a succession of U.S. universities, proudly became what he called an “American writer,” and the couple ultimately was swept up by “Hurricane Lolita” and deposited to a new life of fame and butterfly hunting in the Swiss Alps.

“She was his first reader, his agent, his archivist, his translator, his dresser, his money manager, his mouthpiece, his muse, his teaching assistant, his driver, his bodyguard, the mother of his child, and, after he died, the implacable guardian of his legacy,” writes Judith Thurman in The New Yorker. “Vladimir dedicated nearly all his books to her, and Véra famously saved Lolita from incineration in a trash can when he wanted to destroy it. . . She stopped short of tasting his meals when they dined out, but she opened his mail, and answered it.”

Theirs is one of the great uxorious love stories, and one of the great literary partnerships. “I won’t hide it,” Nabokov writes to his future wife in his very first sentence to her, “I’m so unused to being—well, understood.” While Véra is in a series of German sanitariums for a seven-week spell in 1926 suffering from weight loss, anxiety, and depression, Vlad writes to her every day, endeavoring not only to raise her spirits but, in Amis’s words, “to love her back to health.” The Nabokovs were, postulates Thurman, “valves of the same heart.”
Through it all, on ample display is what Amis describes as the author’s “near-pathological good cheer.” And there also is in these pages an everyday use of language that can only be called an expression of earthly love—a need not only to pin things down in lapidary detail but, in doing so, to celebrate all the world’s beauty and strangeness. (A ball rolling under a chair, the only furniture in the room, shows how all things “seem to have some sort of survival instinct”; angels smoking in Heaven like guilty schoolboys, toss their cigarettes when archangels pass and, “this is what falling stars are.”)

This new volume of letters represents another panel in Boyd’s career-long project of Nabokov scholarship. Boyd completed his PhD at the University of Toronto in 1979 with a dissertation on Ava or Ardor: A Family Chronicle (1969), and was soon after appointed a lecturer in English at the University of Auckland. It was there that Véra invited Boyd to catalog her husband’s archive, a task he completed in 1981, the year he would begin researching what would become his definitive, two-part critical biography. Boyd is currently working on an edition of Nabokov’s unpublished lectures on Russian literature and maintains a website, Ada Online, devoted to ongoing annotations of Nabokov’s last major work. Here the academy’s premier Nabokovian graces the world with an epistolary love story to rival James and Nora Joyce’s.