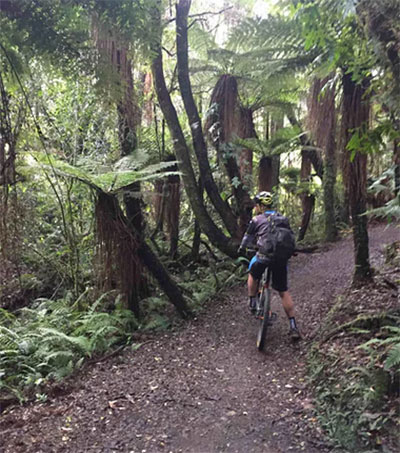 “When you haven’t been on a bicycle for four years – and the reason is because last time you were cycling, you fell off, broke your shoulder bone clean in half and have been slightly traumatised by the sight of bicycles ever since – is it wise to sign up for a 15km mountain bike ride?

“It was worth the post-traumatic stress. On the Old Coach Road near Ohakune you will see all sorts of glory – if your breath is not taken by the cycling, it will be by the extraordinary peace and beauty.

“I’ve been transported to the middle Earth-ish middle of the North Island by the Northern Explorer, a train journey from the city of Wellington, which wends its way through magnificent countryside. Dramatic coastline giving way to vineyards giving way to pastureland giving way to forests giving way to the volcanic plateau of the Mount Ruapehu region, where the perfectly conical Mount Doom (as it is named in Lord of the Rings) doomily presides over a lunar landscape.

“The highlight of my get-back-on-the-bike catharsis was cycling through the disused Hapuawhenua tunnel that runs under the train track. It bends at such an angle that as you push into the cool darkness you cycle, for a few moments, in utter pitch blackness. It is a strange, exhilarating, laugh-inducing sensation – you can’t see a damn thing – and all sound narrows into just the clanking of the pedals and the labour of breath. Without any tight turns and potholes and surprise tree branches and rugged descents to trouble my vision and alarm my brain I finally, finally let go and relax into my cycling rhythm. Then there it is, the light at the end of the tunnel, and out we go, onwards and upwards.”