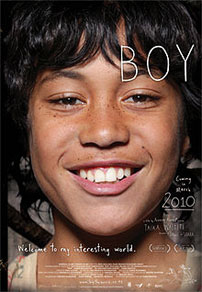 Memorable Boy Grows On You

“Next year’s Oscars, if they were to include the just-for-fun idea of outstanding performance by a setting, should have a nominee in Boy,” The New York Times movie critic David DeWitt expounds. “This movie from New Zealand, filmed in a Maori village near the Bay of Plenty, belongs in the pantheon of quaint and quirky locales that make for memorable films.” “A work as original as Boy is bound to have less solid moments, but they’re mostly forgivable,” DeWitt writes. “The rustic Kiwi feel of Boy will still grow on you, and deservedly so.” Boy opened in Manhattan on 2 March.