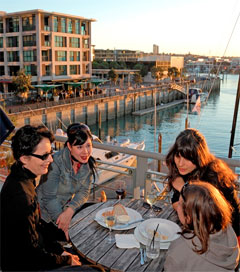 Mayor Gives Residents a Sense of What Auckland Could Be

Auckland sits at No 10 on Monocle magazine’s annual “Top 25 liveable cities” list, with Copenhagen at No 1, followed by Melbourne at No 2. “Auckland’s mayor Len Brown talks of making his city the world’s most liveable,” Monocle reports. “He’s on the right track with the redevelopment of derelict industrial areas, refurbishment of the city’s historic art gallery, a revitalized restaurant scene and better public transport. More than anything, he has given residents a sense of what the city is and what it could be. Now, Auckland must step up to the far harder task of making serious decisions around densification (the city needs to find homes for one million people over the next 30 years) and public transport. Moreover, the New Zealand government, which continues to block key infrastructure projects, must understand what it takes to build a world-class city. Auckland with two harbours and a multicultural population, could easily continue to rise in our rankings.” In “key upcoming developments,” … 57 new electric trains arrive in September and will be operational from next year – quieter, faster and equipped with wi-fi.” Monocle “fixes”: “North Wharf and Wynyard Quarter are beautiful but the city needs more public spaces on the waterfront.” “A liveable city has low crime rates, decent weather, good education, superb healthcare, reliable transport and an airport with a host of international destinations. It’s the sort of place you can be gay or Muslim, or gay and Muslim, and no one cares. Its art galleries open late and museums are free. It takes recycling seriously and encourages independent shops.”