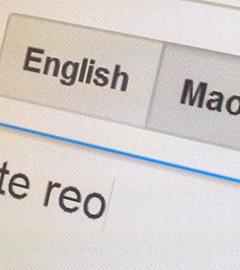 Google has added Maori to the list of languages supported by its online translation service.

From today, converting a Maori phrase into English – or vice versa – is as simple as cut-and-pasting it into Google Translate.

In all, the update brings nine new languages spoken by 200 million people globally including Punjabi, Igbo, and Yoruba (spoken in Nigeria and neighbouring countries); Somali (spoken in Horn of Africa as well as Somalia); and Zulu for those heading to South Africa.

Google New Zealand public policy manager Ross Young says it has taken “months of hard work” with a team of volunteers to get Maori onto the platform.

“For minority languages such as Te Reo Maori, Google Translate provides more ways for the language to be seen and used, and greater understanding for those who are unfamiliar with the language,” he says.

“Online presence of small languages keeps languages relevant in the age of the internet and globalisation, encouraging minority language use by children who are ultimately responsible for bringing the language to future generations.

“We hope that making this language more accessible through this technology will help more people experience our beautiful native language.”

Maori’s inclusion on Google Translate comes five-and-a-half years after it first appeared on the company’s famous search engine. Earlier this year, Google said Maori was being used in its search engine tens of thousands of times a day.

“For a language that numbers only an estimated 30,000 regular speakers, this is a meaningful number of people who are making Maori part of their daily routine – and as experts will tell you, that is the best possible way of bringing an endangered language back from the brink,” Google engineering director Craig Nevill-Manning wrote in a blog post in July.

Google worked with Dr Te Taka Keegan, a Maori language activist and senior lecturer in computer science at the University of Waikato.

“After months of hard work, an amazing team of Maori-speaking volunteers helped translate thousands of words and phrases so Maori language speakers and students could search and explore webpages online.”