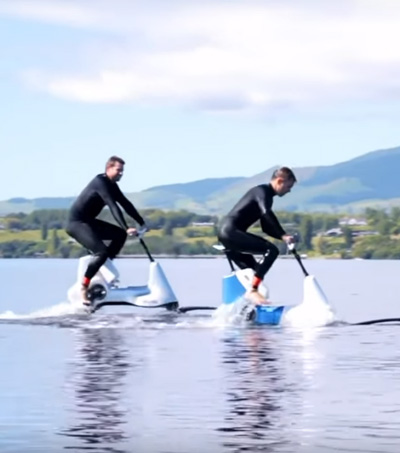 Manta5 Pedal-Electric Hydrofoil Takes To The Lake – Or Sea

What’s the aquatic equivalent of the e-bike?  “That’s what New Zealand outdoors entrepreneur Guy Howard-Willis wondered back in 2010, when he conceived of the Manta5,” writes Ben Coxworth in an article for New Atlas. “In the years since, bicycle designer Roland Alonzo brought the concept to life, in the form of an electric-assist pedal-powered hydrofoil bike. Now the bike that can be used in both fresh and salt water is just about ready to enter the market.”

“I want these bikes to go well beyond just being a leisure product – I want it to be a sports product so it’s competitive,” said Howard-Willis.

“If it’s competitive it’s a whole different market it fits into, and who knows, one day it might be in the Olympic Games. I can see that, it may take a while to get there, maybe I’m too ambitious, but like I say, I’ve always been a dreamer.”

“The Manta5 has an aluminium frame, two carbon fiber hydrofoils that provide lift, and a 400-watt motor that augments the rider’s pedalling power to turn the propeller.” It also has buoyancy modules that keep it afloat when stopped, as reported in the article.

Riders can adjust the amount of electrical assistance provided, depending on how hard they want to work. Current prototypes can run “for an average of about one hour per charge of its removable battery, and reach a top speed of 15 to 20 km/h (9 to 12 mph).”

The first limited-edition production model – the Hydrofoiler XE-1 – “should make its public debut in mid-November, then be available for pre-sale within New Zealand starting late this year or early next,” according to the article.

To see the prototypes in action, please click here.