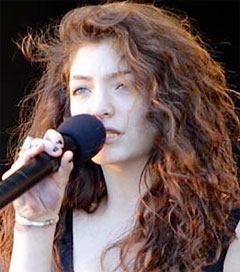 Takapuna singer-songwriter Lorde, 16, “is about to make a big splash beyond blog-land,” according to The Guardian’s daily column “New Band”.  “Think Lily meets Lana, only cuter and more cutting,” reviewer Paul Lester says. “She already is a star back home where her debut EP, The Love Club, went to No 1, and she’s reached No 1 in the iTunes charts in NZ and Australia with that EP and a further single, Royals, while a post on Buzzfeed in the States led to the EP entering the US iTunes top 10 album chart. There’s more: Royals has had 660,000 SoundCloud streams, its accompanying Larry Clark-inspired video receiving nearly 750,000 YouTube views, and her tracks in total have had two million streams. And there have been favourable Tweets by Grimes and Sky Ferreira, which is neat because she has some of the qualities of both without really resembling either. Like Ferreira, she is very blog-friendly, with all the right people saying all the right things, but there are signs that she could, unlike her LA counterpart, become big, converting online attention into sales. More Aluna than Aretha, her voice is cute yet cutting, with a sense that she is critiquing the teen world she inhabits. Lyrically she’s inspired by TS Eliot, Allen Ginsberg and Sylvia Plath (her mother is a poet) and musically you get the impression of someone translating experimental electronica for the mainstream – she’s a fan of Burial and James Blake, and one review described her tunes as popped-up takes on Animal Collective. She’s Lily Allen’s cheeky kid sister, Lana Del Rey’s bratty niece, Iggy Azalea’s scamp of a second cousin twice removed … Well, we’ve run out of impish relations but you get the point.”