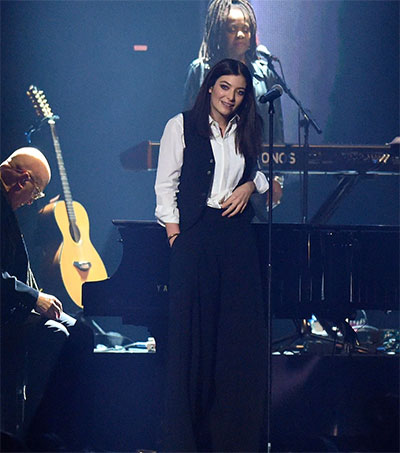 Lorde’s tribute to her hero David Bowie at this year’s BRIT Awards has been called “dignified”, “powerful” and “heartbreaking”. Singing Life on Mars with Bowie’s own backing band, Lorde’s was an “acid, disaffected take on the song,” which “resisted some of the over-the-top sentimentality of Lady Gaga’s [Grammys] performance,” the Daily Beast said.

Of all those who have performed tributes since Bowie’s death, the Guardian gave the teenager the only 10/10 mark.

Lorde, 19, was one of many musicians to share her thoughts about Bowie immediately following his death. In an emotional Facebook post, she recounted the time Anna Wintour introduced her to Bowie backstage at a Vogue event at which she had just performed.

“That night something changed in me – I felt a calmness grow, a sureness. I think in those brief moments, he heralded me into my next new life, an old rock and roll alien angel in a perfect grey suit,” she wrote.

Music critic for the Telegraph Neil McCormick wrote that Lorde was chosen for the evening, alongside Adele and Annie Lennox, because Gary Oldman told the New Zealander that Bowie was a big fan and called her “the future of music”. “It was easy on this evidence to understand why,” McCormick said.

“From the outset, the teenager has come at music from her own angle, with a core of arty individuality and internal conviction rarely found in mainstream commercial pop. She sang that wonderful, mysterious song as if it came from somewhere deep inside.”