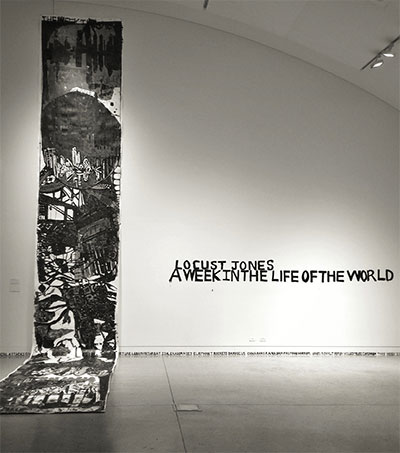 It is a rare and rewarding moment to stumble across an exhibition that is as cohesively considered as Christchurch-born artist Locust Jones’ A Week in the Life of the World, not only in its making but its presentation within the gallery space of the Blue Mountains Cultural Centre, ArtsHub reports.

A Week in the Life of the World takes its title from the Guardian, a newspaper that Jones reads daily with a kind of religious zeal. Its headlines, phrases and permeations settle across the gallery with a noisy, insistent chatter – cut up fragments of quotes that graphically, and structurally, pick up on the zeitgeist of global chaos.

While some reference has been made to the German Expressionist movement, this show is uniquely Jones and has a strength of its own identity and mark.

Jones explained in a statement: “The first thing I do when I wake up in the morning is turn on the radio, then the internet – Al Jazeera followed by other world mass media internet sites. I listen to stock market quotes, financial information, reports on who has died, what plane has crashed, what politician has been assassinated, what climate change disaster is coming, endangered species and nuclear accidents …

“… I stand next to a wall scribbling down all the facts and figures on cupboard doors in the kitchen while I wait for my coffee to brew. All this information is channeled into my drawings and paintings. I then go out and buy the current newspapers…I have the radio on or live web stream from Al Jazeera while I work. I am permanently plugged into the chaos of the day.”

It is a strong body of work both in content and its graphic handling by Jones. And, unlike this constant news cycle, quickly forgotten, Jones’ exhibition will have permanence.

Jones has completed residencies in Seoul, Beirut and New York and in 2009, he was the winner of the Hazelhurst Works on Paper Award, and the Drawing section of the Fisher’s Ghost Art Award.

A Week in the Life of the World is on until 6 September.

Tags: A Week in the Life of the World  ArtsHub  Blue Mountains Cultural Centre  Guardian (The)  Locust Jones