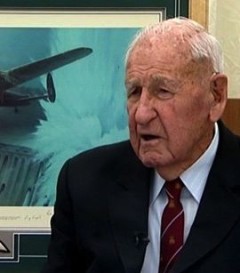 ‘Older people still recall the grim days of 1943 and remember the good news – when that was a rare commodity – that Germany’s massive dams were breached by an elite squadron of British bombers,’ says the Daily Mirror. New Zealander, Squadron Leader Les Munroe, now aged 94, was one of the pilots who flew on that remarkable, daring, and highly dangerous mission into Nazi Germany. Munroe’s mission was to blow up three German dams on the Ruhr, disrupting German war production. The dams could not be breached by high-altitude bombing and had to be hit front-on to ensure their destruction. To achieve this task, Munroe and the other pilots were given a bizarre and hitherto combat- untested weapon – the ‘bouncing bomb.’ The bomb had to be dropped at low altitude, on the waters surface, and then ‘skip’ its way to the target. The precision raid was a success, with two out of the three dams being destroyed. ‘The raid disrupted supplies of water and electricity to Hitler’s industrial heartland just as its factories were pumping out the tanks and aircraft that Germany needed to win the war. The damage to the dams was called a catastrophe in Germany at the time,’ according to the Daily Mirror. But success came at a heavy cost. ‘The bombers had to fly so low, that one scooped up a load of the North Sea on the way across and another disappeared in a fireball as it hit high voltage power lines. Of the 19 Lancaster bombers, each with seven crew, three had to turn back. Of the remaining 16, eight crashed and 53 men were killed’, the Daily Mirror records. The cost on the ground was higher. Over 1300 people, mostly civilians, died in a massive flood as the dams cracked. But the raids success ensured that, ever since, Royal Air Force 617 Squadron is better known as the ‘Dambusters’. Les Munroe is now one of only two surviving members of the original ‘Dambusters’ crews. Recently, to mark the 70th anniversary of the raid, Les returned to Lincolnshire, England, where he began training for the top-secret mission. Les flew one of the bombers that had to turn back. Flack knocked out all his communications, along with the master compass he depended on for low-level flying and navigation. ‘I don’t think they were actually worried, the crews, very much, but what did was the route to dams through the heavily defended industrial area of the Ruhr,’ Les Munro told New Zealand’s TV1 News when asked about the raid. But, Les added, ‘The general feeling, the effect on the British morale was really significant, and I think from that point alone it was justified.’ Les Munroe flew 53 combat missions during WW2, after originally being rejected for pilot training because of his low school marks. So he studied by correspondence to improve them. Les puts his survival during the war down to “Lady Luck’. After the war, he became a valuer, and then a farmer in the Bay of Plenty. Les is one of New Zealand’s many WW2 heroes. NZEdge joins the Daily Mirror in saluting his courage, and that of his comrades.