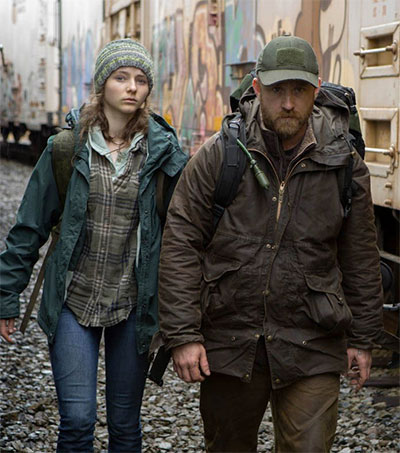 “Debra Granik is the exceptional film-maker who directed Winter’s Bone in 2010, launching the career of Jennifer Lawrence, and now she returns with this deeply intelligent, complex, finely tuned and observed movie, [starring New Zealander Thomasin McKenzie],” Peter Bradshaw writes in a five-star review of the film for The Guardian. Leave no Trace premiered at the 2018 Cannes Film Festival.

“Weirdly, this film initially reminded me of a fatuous and naive (and bafflingly overpraised) film called Captain Fantastic, which features Viggo Mortensen as a charismatic, disciplinarian dad who has taken his children to live with him in the wilderness,” Bradshaw writes. “Leave No Trace is everything that that movie should have been: careful, realistic, with a sense of what is possible and what is at stake for those people who really do attempt to turn their backs on conventional living and also reject the stigma of homelessness – but what is also at stake for their children who have had no choice in the matter.

“Ben Foster and McKenzie play Will and Tom, a grizzled army veteran and his 13-year-old daughter.

“Will and Tom are living a kind of radical Thoreau-guerrilla existence in a huge public park in Portland, Oregon. They have built a secret camp with tarps and rudimentary cooking implements, making their own fires. They share a tent. They read books. They have military-style drills for staying undercover. Periodically, they amble out of the park and into the city, where Will can pick up his prescription for ovoid painkillers at the vets hospital, which he can discreetly sell for cash on the black market to buy food – and then they return to the jungle. It seems like a perfect, even Edenic setup. But then Tom carelessly allows herself to be spotted by a hiker and things take a wrong turn.

“The personae of Will and Tom are strikingly restrained, both in their conception and performance: there is an attractive humility and restraint at work, a quietism. No scenery-chewing, no fireworks, no obvious scary-Colonel-Kurtz stuff from Will or obvious teen rebellion histrionics from Tom.

“The intimacy and love between Will and Tom is presented with real delicacy. It’s a movie that will live with me for a long time.”

McKenzie, 17, is from Wellington. She attends Samuel Marsden Collegiate School, where she is in Year 13.