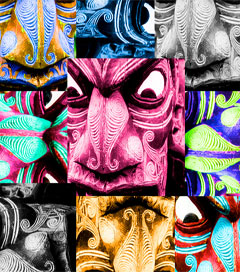 Historically, geographically, culturally – there are many points of comparison between New Zealand and its neighbour to the west, Australia. But there are notable differences. Victoria University’s Professor Harry Ricketts examines migration in New Zealand in an essay for The Conversation entitled, “On masks and migration: learning to stand upright in New Zealand”.

“Theatrically, the use of masks links Krishnan’s Dairy to classical Greek tragedy, Commedia dell’arte, Japanese Noh drama, also religious ritual and observance in many parts of the world. Equally, the masks point to the front, the persona, that immigrants often, perhaps always, feel required to adopt on coming to a new country, to New Zealand, for instance.

“Accent is always a powerful marker of difference: [Krishnan’s Dairy characters] Gobi’s and Zina’s Indian English; my modified public school English [Ricketts moved to New Zealand from the UK in 1981]; the German, Polish, Czech, Austrian and Hungarian accents of the Hitler-fleeing refugees Ann Beaglehole chronicles so movingly in A Small Price to Pay.

“Successful reinvention is one possible consequence of being an immigrant, previously unguessed-at energies and potentialities being released by a change of country, together with a lack of former constraints or inhibitions.

“… [The] question of what does or does not constitute New Zealand identity persists.”