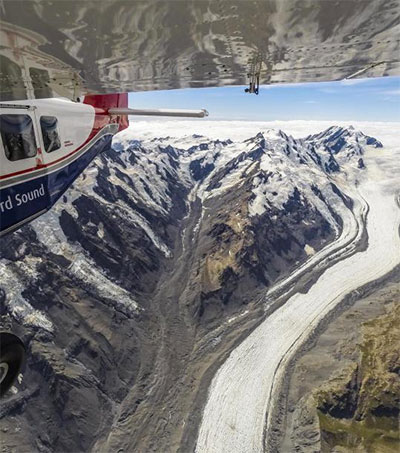 Every March, glacier “watchers” take to the skies to photograph snow and ice clinging to high peaks along the length of New Zealand’s Southern Alps. Researchers Andrew Lorrey, Andrew Mackintosh and Brian Anderson write about the effect warmer temperatures are having on our glaciers for media outlet, The Conversation.

The summer of 2017-18 was New Zealand’s warmest on record and the Tasman Sea experienced a marine heat wave, with temperatures up to six degrees above normal for several weeks.

The loss of seasonal snow cover and older ice during this extreme summer brings the issue of human-induced climate change into tight focus. The annual flights have been taking place for four decades and the data on end-of-summer snowlines provide crucial evidence.

The disappearance of snow and ice for some of New Zealand’s glaciers is clear and irreversible, at least within our lifetimes. Many glaciers we survey now will simply vanish in the coming decades.

Glaciers are a beautiful part of New Zealand’s landscape, and important to tourism, but they may not be as prominent in the future.

When Trevor Chinn began studying New Zealand’s 3000 or so glaciers in the 1960s, he realised monitoring all of them was impossible. He searched for cost-effective ways to learn as much as he could. This resulted in comprehensive glacier mapping and new snow and ice observations when similar work was dying out elsewhere. Mapping of all of the world’s glaciers – nearly 198,000 in total – was only completed in 2012, yet Chinn had already mapped New Zealand’s ice 30 years earlier.

It was a visionary approach that provided a powerful and unique archive of climate variability and change in a remote South Pacific region, far removed from well-known European and North American glaciers. But what was hidden at the time was that New Zealand glaciers were about to undergo significant changes.

Chinn took part in this summer’s flight and said:

“This year is the worst we’ve ever seen. There was so much melt over the summer that more than half the glaciers have lost all the snow they had gained last winter, plus some from the winter before, and there’s rocks sticking out everywhere. The melt-back is phenomenal.”

Continuing the snowline photograph work will allow us to better identify climate change tipping points and warning signs for our water resources – and therefore better prepare New Zealand for an uncertain future.