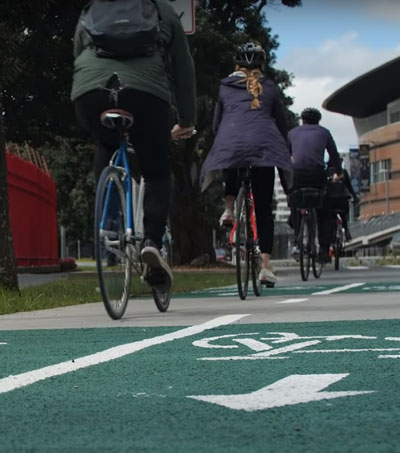 “A new study by researchers from the University of Otago, Wellington and Victoria University has confirmed that building cycleways benefits the planet because swapping four wheels for two leads to a reduction in carbon dioxide emissions.” Carlton Reid reports for Forbes.

While “the study admits that the small reduction is ‘not significant globally,’” it’s the first study to have shown “that cycling and walking infrastructure does reduce transport carbon dioxide emissions within a short space of time.”

“There is clear potential for such programmes to be instigated on a larger scale with a correspondingly larger impact on carbon dioxide emissions,” said lead author Associate Professor Michael Keall.

“Reducing carbon emissions from the transport sector is essential to meet the Paris Agreement emission reduction pledges made in 2015,” writes Reid.

“In the three years after the development of the new infrastructure in two small New Zealand cities, it was found there was a reduction of 1.6% in vehicle kilometers traveled and an associated 1% drop in carbon emissions.”

“The data from New Plymouth and Hastings were compared with information from Whanganui and Masterton, cities which received no additional government funding for cycleways or footways.”

Study co-author Dr. Caroline Shaw “said the research demonstrates that people are prepared to get out of their cars if good cycling and walking infrastructure is provided.

“We already know that putting in cycling and walking infrastructure reduces congestion and makes cities nicer places to live, as well as being highly cost-effective. We now also know that it reduces carbon emissions.”