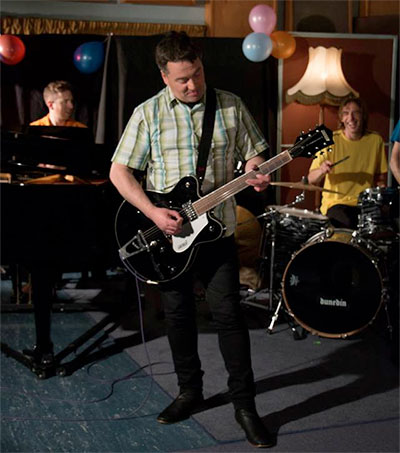 At Last Martin Phillipps Is Back

At last, The Chills are back and its something of a miracle to meet Martin Phillipps preparing for his first London show with the band for 18 years, Michael Hann reports in the Guardian.

The Chills were poised on the brink of fame far beyond their native New Zealand in the late 80s with their unique, otherworldly pop when lead singer Martin Phillipps succumbed to depression and drugs.

Phillipps says the Chills sounded like too many different things for their own good. “The sheer breadth of material was unusual and it made us hard to pin down. People would despise us for the jangly pop and not realise there was some pretty full-on material. There was almost orchestral stuff, folky stuff, psychedelic stuff, quirky stuff. It’s really hard to put on a Chills album in any given place. You couldn’t put it on at a party because it’d suddenly go all weird on you. You couldn’t sit back and relax because it would suddenly go all punk on you.” You can hear the variety on a new compilation of their 1980s sessions for the BBC, released earlier this month.

The refusal to stand still may have been offputting for some, but it is what made others love the Chills: the sense that you never quite knew what was coming next.

When he takes to the stage a few hours later, the Chills behind him, there’s a feeling of genuine wonderment in the room. Phillipps, never exactly the model of a pop star, admits to being rather stouter than he used to be, and hardly a visual point of interest. But it’s rare to be in a room where everyone present is simply delighted to see one person back on a stage, and waves of goodwill wash from the audience towards Phillipps. “Go on, Marty!” someone shouts. Phillipps smiles, and gets on with it.