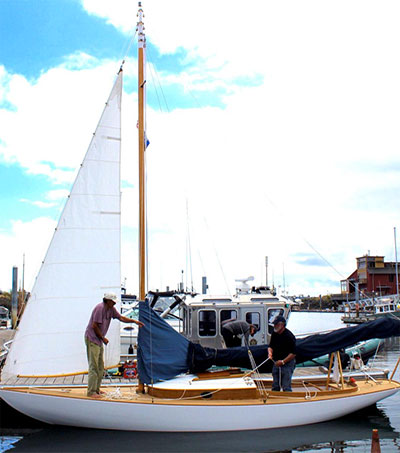 Two years of hard work came to fruition recently, when the Northwest School of Wooden Boatbuilding in Washington, in the United States, launched the newly finished Dark Harbor 17 ½ sailboat, ‘Kotimana’. The yacht was commissioned in 2017 by former boatbuilding student Kere Kemp and his wife, Susan, two New Zealanders who have lived in the Seattle area for the past 22 years.

The building of the wooden sailboat took two years of traditional large craft boatbuilding classes at the school and the accumulated work of 16 students, 12 staff members, and more than a dozen local marine-trade workers from Port Townsend.

Originally called the Manchester 17, the Dark Harbor 17 ½ design dates back to 1908, and is credited to American naval architect B.B. Crowninshield. The boat is a sleek daysailer yacht, with a classic look and fine details such as a teak deck and bronze hardware.

Kere Kemp had always been interested in yacht designs dating from the late 1800s and early 1900s because of their classic look, so when he saw a Dark Harbor boat for the first time while at a boatbuilding workshop in Seattle, he knew it was the kind of boat he wanted.

“Somebody once said, ‘When you see the boat that’s meant for you the line sings for you,’” Kemp said. “I was hearing operas. She sang to me.”

A former student of the boatbuilding school, Kemp decided not only would it be cheaper to commission the boat to be built there, but it would also allow him and his wife to be involved in the process. He also hoped the design would lend itself to teaching important skills.

“I knew when I had commissioned it that as a design, she was going to be not just a challenge, but a pleasure for the students to build,” Kemp said.

The Kotimana has been shipped to Tasmania to go on display at the Australian Wooden Boat Festival in February.

After its display at the Australian festival, the Kotimana will live at its new home in New Zealand with the Kemps, hence its name: Kotimana is a Māori word meaning ‘thistle’. Kemp, who is half Māori and half Scottish, chose the name as homage to his heritage.