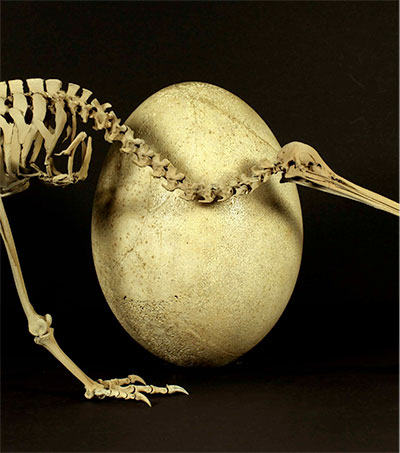 New evidence shows that if the emu was the kiwi’s cousin, then Madagascar’s elephant bird was it’s sibling.

Speculation continues as to the origins of New Zealand’s diminutive kiwi, new research now links the bird to a giant extinct ancestor from Africa, prompting scientists to rethink how the flightless birds evolved.

A new report published in the journal Science says DNA-testing indicates the kiwi’s closest relative is the elephant bird from Madagascar, which grew up to 3m tall and weighed up to 250kg. It became extinct about 1000 years ago.

The authors say the results contradict theories that the kiwi and other flightless birds, including the ostrich and emu, evolved as the world’s continents drifted apart 130 million years ago.

Instead the report suggests it is more likely their chicken-size, flight-capable ancestors enjoyed a window of evolutionary ascendancy about 60 million years ago, after dinosaurs died out and before mammals grew big.

The authors say those birds were likely to have flown between the continents, with some staying and becoming the large, flightless species we know today.

New Zealand-born Alan Cooper, a professor at the University of Adelaide and a co-author of the paper, said the DNA results came as a huge surprise given the differences in size and location between the kiwi and elephant bird.

“This has been an evolutionary mystery for 150 years. Most things have been suggested but never this,” Cooper said. “The birds are about as different as you can get in terms of geography, morphology and ecology.”