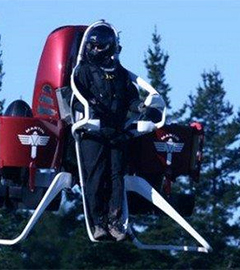 Kiwi Jetpack to Hit US Market

It can travel at speeds of up to 80km/h, ascend to heights of more than 2km in the air and has enough juice to fly for 30 minutes – the much promised science fiction of personal air travel by jetpack is now a reality. Ten Americans have paid their deposit for the US$150,000 Martin jetpack, which was developed in a backyard garage in Christchurch, New Zealand.

All they need now is regulators to catch up with the innovation and endorse its use.

Regulators need to answer questions reminiscent of America’s most beloved superhero: Is it a plane? Is it a helicopter? Is it a microlight? If the answer’s the latter then fewer regulatory hurdles are faced in getting the Martin up in the air – although the question of its use in urban areas remains moot.

Strictly speaking, it’s not a jetpack, despite the name. It is actually twin-ducted fans powered by a petrol engine. At present the device is certified for manned flights in New Zealand but cannot be flown more than 7m above the ground or 7.6m above water. A Federal Aviation Administration spokeswoman told the Wall St Journal that if the Martin jetpack is designated an ultralight, users may not necessarily require a pilot’s licence to operate the flying machine. Talks are continuing with aviation regulators in New Zealand and Australia about its use.

Creator Glenn Martin, who spent 30 years developing his innovation, now on its twelfth iteration, says the early experiments required absolute secrecy. His son once got into trouble at school and the teacher told Martin, “he’s got this vivid fantasy life because he believes you have a jetpack in your garage at home”.

“We had to get the teacher to sign a non-disclosure agreement.”