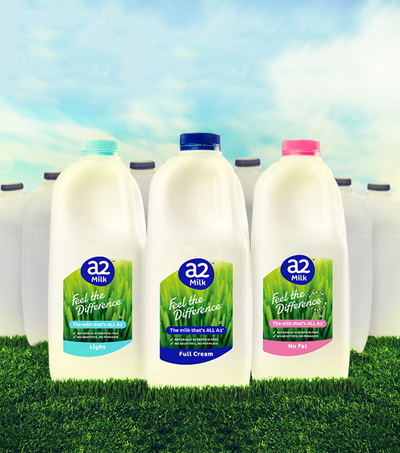 A2 Milk – an organisation based in Sydney but founded in New Zealand, have not only challenged conventional wisdoms in regards to milk consumption, but also outperformed many major global dairy producers with their A2 milk products.

The point of difference in the milk sold by A2 is that “a2 Milk products are sourced from dairy cows that produce only the A2 type of beta-casein protein, whereas most dairy contains both A2 and A1.”

According to scientists A1 forms a fragment when digested that can trigger inflammation in the body as well as other conditions such as irritable bowel syndrome. It is believed that this is the reason for the discomfort many experience when consuming regular milk.

A quarter of consumers in western countries report some kind of discomfort after drinking regular milk as stated in a 2010 paper from the Innovation Center for U.S. Dairy.

After making the switch to A1-free milk, consumer Gillian Fyvie for instance reported that her stomach aches and bloating stopped.

Sales of the company’s A1-free fresh milk, milk powder, ice cream and other dairy goods drove an 80-fold increase in first-half profit and enabled a2 Milk to fund a foray into China’s booming $19.9 billion market for infant formula.

The fact that around 85% of consumers report discomfort when consuming regular milk in China makes the country a particularly attractive market for a2 Platinum, the infant formula brand.

“In Australia, a2 has become mainstream,” said Oyvinn Rimer, a research analyst at Harbour Asset Management Ltd. in Wellington.

“Very sophisticated consumers are buying into this product. They believe it’s better for them, and they’re willing to pay more for it.”

Last month, the company raised its profit forecast and predicted revenue may surge 126 percent to as much as NZ$350 million in the year ending June 30.

Over the past year its market value has more than tripled to NZ$1.2 billion and in Australia the shares have jumped 189 percent to A$1.635 in less than a year since they began trading in Sydney.

A2 milk was founded in 2000 by New Zealand scientist Corran McLachlan and multimillionaire farm owner Howard Paterson. By far the best performer on New Zealand’s S&P/NZX 50 Index the past year, the company has won almost 10 percent of the fresh milk market in Australia with a product that sells for more than double the price of regular house-brand milk.