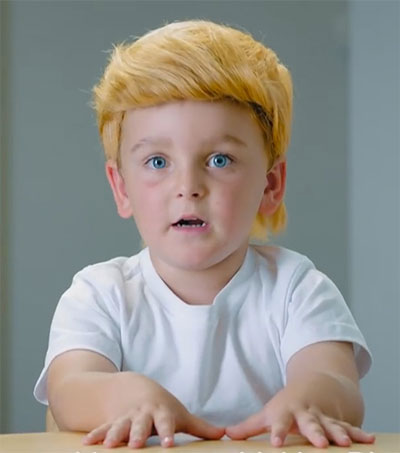 Six New Zealand children are taking aim at US Republican presidential hopeful Donald Trump in a parody advertisement for online electricity retailer, Powerhouse, with the hope of proving that power should be used for good, chief executive Ari Sargent said.

The young boys wearing thick orange wigs similar to Trump’s famous bouffant repeat direct quotes from Trump that he has made during his run for office.

“Our video parodies Mr Trump by projecting his own words through the mouths of loveable toddlers to highlight how infantile he is,” Sargent said.

The direct quotes range from Trump boasting about his intelligence, to taking aim at former opponent Ted Cruz.

“Be careful lying Ted,” one boy says, “or I’ll spill the beans on your wife.” “Let me tell you, I’m a very smart guy,” another boy quips.

“I do not wear a rug,” a third says as the thick wig rests on his head.