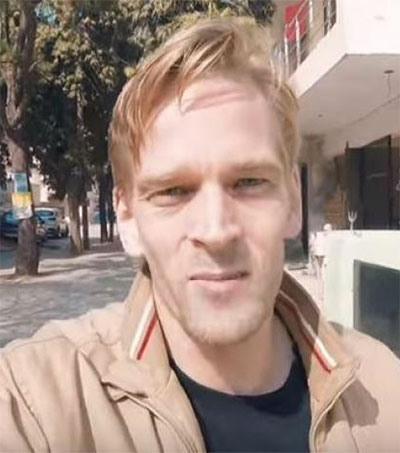 Karl Rock, a New Zealander currently living in Delhi, has won many Indian hearts with his fluent Hindi, and in his video “Foreigner Surprising Indians with Hindi” specifically.

On his website India Survival Guide, Rock identifies as someone who is “… experienced and passionate about Indian life and culture and has travelled extensively throughout India and surrounding countries.”

India Survival Guide grew out of Rock’s passion to ensure sceptical foreigners had a good time and a safe stay in India. Today, it has expanded into a book, a website and YouTube channel with close to 12,000 subscribers.

From tips on ‘How to avoid scams in India’ to a look inside Indian weddings and kitchens, Rock has covered much ground. However, he was in the limelight most significantly after he released a video of his walks around Indian streets (mostly in Gurgaon and Haryana) interacting with locals in Hindi and Haryanvi, and their astonishment at his language skills.

Rock says he chose to learn Hindi for a couple of reasons.

“Firstly I was dating a [non-resident Indian] NRI at the time, and I just wanted to know what she was saying when she spoke in Hindi,” he explains. “Then I realised that Hindi was a language I could use and practice in the West because the Indian diaspora is so spread out. Now that I’m in India travelling to all 36 states and union territories, and India before partition, it’s become invaluable.

“European languages like French and German are useless in New Zealand because there are so few speakers. Mandarin or Hindi speakers are much easier to find every day in New Zealand.

“[Indians are] usually amazed and intrigued [when I speak Hindi]. They’re all busy learning English, and here I am learning Hindi. It’s the last thing they expect, which is why I made the video I did. I wanted to show the world the beauty of language connecting people who usually cannot communicate.”